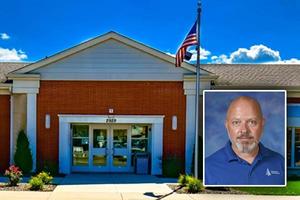 Hennessy, a graduate of SE and CMS, has worked in the District for the last six years as a Maintenance Technician

The Evergreen Park School District 124 Board of Education has approved the hiring of Jim Hennessy as the District’s next Director of Buildings and Grounds.

Hennessy, a graduate of Southeast School and Central Middle School, has worked in the District for the last six years as a District Maintenance Technician. In that role, Hennessy has completed work tickets, repairs, and assisted with emergencies across the District – inside and outside of all five schools and the District Office.

“The entire Facilities Committee was impressed with Mr. Hennessy as a candidate and he was our unanimous recommendation to the Board for this position,” D124 Superintendent Dr. Robert Machak said.

“We know that the next Director has some big shoes to fill, and it appealed to all of us that Mr. Hennessy has worked side by side with current Director Ron Weber for the past six years. He knows the level of excellence that Ron expects. Our Building and Grounds Department is already outstanding; I really appreciated the passion with which Mr. Hennessy talked about being a part of this amazing team and the steps that he would take to make it even better."

The Evergreen Park native said he’s excited to take on a leadership position within the school system he knows so well.

"As a former student and current employee of the District, I'm confident that my knowledge and experience is beneficial to the Buildings and Grounds Department,” Hennessy said. “Accepting the position of Director will allow me to continue with the progress that the department is making now, and help to advance the District's facilities in the future."

Prior to joining the District 124 family, Hennessy worked for the Sprinkler Fitters Union installing fire sprinkler system throughout Chicagoland. He earned his bachelor's degree from Governors State University and an associate's degree from Moraine Valley Community College.

Hennessy will officially begin his new role as Director of Buildings and Grounds on July 1, 2020, following the retirement of current Director Ron Weber. Until then, the pair will work together to ensure a successful transition.

“I am very confident Jim will do an outstanding job as the District’s next Director of Buildings and Grounds,” Weber said. “Jim is proficient in all of the trades and has been doing great work for the District throughout the past six years. He has a positive attitude, great ideas, and his knowledge of all of the District’s buildings will be a great asset as he establishes himself in the role.”